Sandy was my soft coated wheaten terrier. Here’s a photo of him when he was about a year old. He was all terrier – a great companion and ready to defend the home turf against all intruders: horses, deer, foxes, skunks, squirrels, chipmunks, racoons, and even some bird species. He was affectionate, always jumping up to kiss or placing his chin on your lap. He had a sense of humor and was a trickster at heart.

Several years ago I bought a natural flea collar for him. He seemed to scratch more after wearing the collar and eventually created a swollen hot spot around his neck from his incessant scratching which continued even after the collar was removed. Eventually the spot had become infected despite the veterinarian’s best efforts. One day I came home and found him motionless and staring at the corner of the room. He didn’t respond to my voice, he just stood there motionless like a statue. I picked him up and placed him on the bed but he continued to remain fixed like a statue. He just wouldn’t change his position. He was literally catatonic. I reasoned that his mental state was caused by sepsis, a generalized infection that was caused by the hot spot. I thought about the homeopathic remedies used for humans in such a state and pried open his mouth and sprinkled a few pellets of Belladonna 200C on his tongue and then closed his mouth. Within about 20 minutes he was able to lie down on the bed. After an addition 40 minutes he seemed his normal terrier self and he no longer scratched at the hot spot. Within a week, the spot had completed healed. My prescription was my best guess based on what I had observed and my assumption that infection was the cause of his change of mental status. The result was nothing short of miraculous. When the homeopathic remedy is correct the results can be astounding. Homeopathy is based on a detailed description of the patients symptoms but sometimes, in the case of animals and small children, the homeopath must relay on observation, medical knowledge and knowledge of the remedies. 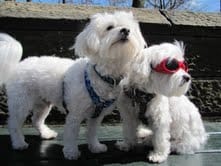 As an additional doggie treat here is a photo of a patient’s  Maltese dogs. Harry is on the right and Daniel is on the left. Harry looks way cool with his glasses but they serve a medical purpose. Harry has atrophy of his irises and the glasses allow him to tolerate the bright sun. My patient says that when Harry hears somebody say, “Look at that  cute dog with the glasses”, his sits and waits for his picture to be taken! He tolerates the glasses without complaint and when he gets back inside, he throws his head back and flips the glasses onto the top of his head. You can’t make this stuff up!