Although there are many references in the old and modern homeopathic literature about the treatment of cancer by homeopathic methods, most US homeopaths do not treat cancer. The reasons for this are several and varied but for me it is a matter of ethics. We simply do not have any clinical trials that would compare to the research of conventional methods of fighting cancer.  I don’t think it is ethical to offer homeopathy as the primary treatment for any malignancy. The only exceptions would be for cancers that do not have any treatment or situations in which the patient has “maxed out” on conventional treatment and the homeopathy would be for palliation.  Sometimes, conventional treatment for some cancers is relatively non-invasive such as local instillation for bladder cancers, topical treatments for some skin cancers and anti-estrogen treatment for some breast cancers. In these cases, homeopathy can be used as an adjunct to the conventional treatment as part of an integrated approach with the oncologist as the head of the actual or virtual team.  Sometimes a diagnosis of cancer is made and the oncologist will opt for “watchful waiting” as in the case of prostate cancer. In that case homeopathic treatment can be given during the watching period with regular follow up appointments recommended by the patient’s urologist. There is another area in which homeopathy and cancer can overlap and has been part of my practice for the past 30 years and that is the homeopathic treatment of the side effects of conventional anti-cancer treatments. Homeopathy can be used to alleviate the side effects of chemotherapy, radiation, surgery and hormone therapies.  Much good work can be accomplished with the use of some homeopathic medicines, some dietary and supplement advice.

Recently, a book entitled Cancer and Homeopathy was published in France. It was written by Dr. Jean-Lionel Bagot, a French oncologist. Since 2006 he has treated over four thousand patients a year in a university hospital setting. He uses conventional methods in treating cancer yet uses homeopathy to manage pain, fatigue and the side effects of conventional cancer drugs and treatments. He finds that homeopathy is non- toxic and does not interfere with the conventional treatments. A study conducted at The University Hospitals at Strasbourg, where Dr. Bagot is an attending physician, showed in 2007 that 29% of the oncology patients were using CAM (complementary and alternative medicine). Of these 56% were using homeopathy, 37% were using herbal therapies and 31% were using Iscador, an injectable form of mistletoe. A second study conducted in Paris a few months later revealed that 34% of patients were using CAM as part of their cancer treatment. In 2010, the Paris survey was repeated and among 850 oncology patients 60% were using CAM. Of those patients utilizing CAM, 33% used homeopathy. These studies indicate that the use of homeopathy as part of a comprehensive cancer care program doubled in the four years between 2007 and 2011. The French government has promoted the concept of the Cancer Plan which encourages the integration of conventional and alternative approaches as part of the supportive care team. Using these studies as a measure of CAM use, Dr. Bagot then estimates that of the two million French cancer patients, 440,000 are receiving homeopathic treatment for cancer in France.

These figures are in stark contrast to the often unkind comments about homeopathy that are found on the internet, especially among millennials. It is also a reminder that modern medicine needn’t be at odds with holistic practice and that outside of the US, people are not held captive by a healthcare delivery system that often resembles a cartel and what I call the medical industrial complex.

Although I am not recommending this book for patients, I wanted to let you know that outside the US, homeopathy thrives and caring and creative physicians are helping cancer patients any way they can. In the US, you will have to put together your support team based on your own research and networking. Over the years, I have been a part of some care networks adding my expertise to various teams.

This book also prompts me to bring up another point. After almost 30 years of practice I have taken care of many cancer patients and have watched them go through the process of diagnosis, emotional shock, acceptance and then the various treatments such as surgery, chemotherapy, radiation and years of more anti-tumor medication.  I have also watched as these patients stayed away for years or decades only to succumb to the return of the original cancer or a new cancer caused by the treatment for the first cancer. It breaks my heart to have these patients call only weeks before some palliative procedure is planned for the new incurable cancer and to tell them that there isn’t anything I can do to help them. The message is that conventional cancer treatment is exactly that – it is a treatment and usually not a cure. “Cure” is actually defined as the cancer staying away for 5 years. It is an artificial milestone that goes back over 100 years, long before the advent of modern cancer treatment.  Even homeopaths 100 years ago used that benchmark. The difference is that the homeopaths were treating the patient not the disease and they were satisfied to arrest the tumor and have the patient live on in good health for decades afterward.  They didn’t cut, poison or burn the tumor; they prescribed their remedies for the totality of the patient’s symptoms, generalities and characteristics.

We tend to practice medicine in this country with an acute care, crisis model. You go to the doctor for a few visits for your medical condition and you are done. However, older models such as homeopathy, osteopathy, traditional Chinese, Tibetan or Ayurvedic medicine, see it differently. You go to the doctor for help but then continue to go to maintain your health.  In these vitalist traditions, a visit a few times a year is essential for health and longevity.

In my practice, once a patient’s group of chronic remedies has been identified and once a patient’s chronic musculoskeletal strain patterns have been identified, then they are asked to come back once or twice a year to stay healthy. They are always welcomed to come back for acute issues as needed but too often they ignore the email reminders for ongoing care. This is unfortunate. In the case of cancer, the tumor has been removed but the energetic or genetic disturbance which allowed the tumor to form has not been addressed.  The disturbance emerges again in the form of another disease or condition and this is then treated in the conventional way further delaying the resolution of the original disturbance. After things have settled down and visits to your oncologist have been reduced to once every 2 years, patients should see their homeopaths and begin the process of unraveling the mystery of why the cancer happened. It is a zig zaggy process of uncovering layers of illness and injury and genetic inheritance but there are remedies available to do this important work. The sooner the better. 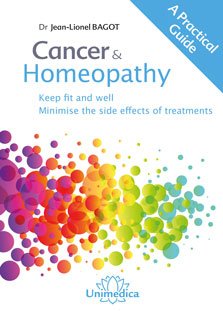